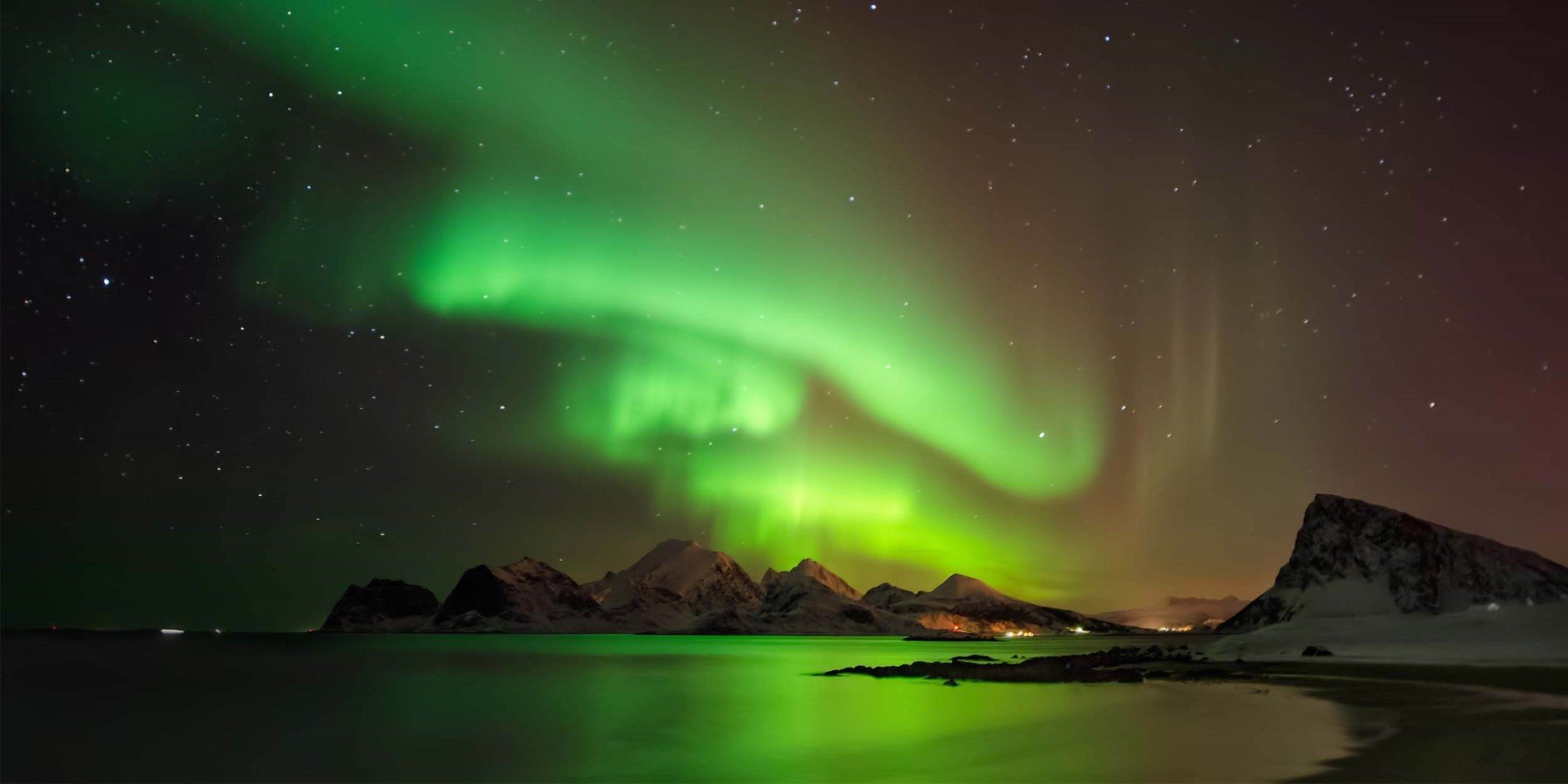 Where can I see the Northern Lights?

The Aurora Borealis is most commonly seen in the polar regions, within a radius of 1,550 miles around the magnetic poles. This area is known as the Auroral Zone or the Auroral Oval. For the Northern Lights, the further north you travel the more likely you are to catch a glimpse of the aurora. Above the Arctic Circle (66°33’N) is the best place to go aurora hunting which is why northern Norway and Svalbard are some of the best places on earth to see the Northern Lights.

When can I see the Northern Lights?

While technically the Northern Lights are present for much of the year, there aren’t enough hours of darkness to see them during the summer months, even above the Arctic Circle. The winter season in the Arctic lasts from late September to late March / early April. During this time, the Arctic sky is dark enough for the Northern Lights to be visible in the right conditions. The aurora is at its most active around the equinoxes in March and September.

The Northern Lights most commonly appear between 5:00 pm and 2:00 am. They don’t usually exhibit for long – they may only show for a few minutes, then glide away before returning. A good display may last for no longer than 15-30 minutes at a time, although if you’re really lucky, they could last for a few hours.

To see the Northern lights, the sky needs to be dark and clear of any clouds. Some people claim the aurora comes out when temperatures are colder; this isn’t the case, it’s just that when the skies are cloudless, temperatures tend to drop.

How are the Northern Lights created?

The light show we see from the ground is caused by electrically charged particles from space entering the Earth’s upper atmosphere at a very high speed. For more detailed information, read our full guide on what causes the Northern Lights.

How will I know if the Northern Lights will appear?

While there is no guarantee of spotting the Northern Lights, being in the right place at the right time helps, which is why Hurtigruten feels confident enough to offer the unique Northern Lights Promise, on our 12-day Roundtrip Cruise along coastal Norway.

But there are forecasts available. The Kp-index is generally considered the most accurate – it’s much more reliable than the weather forecast. The forecast corresponds to the planetary magnetic index on a scale of one to nine, with one being very low activity and nine very high. The Geophysical Institute at the University of Alaska has an excellent website, which allows you to view predicted activity in all auroral regions. You can also sign up for Northern Lights forecast email alerts that tell you when activity rises above four to five on the Kp-index. 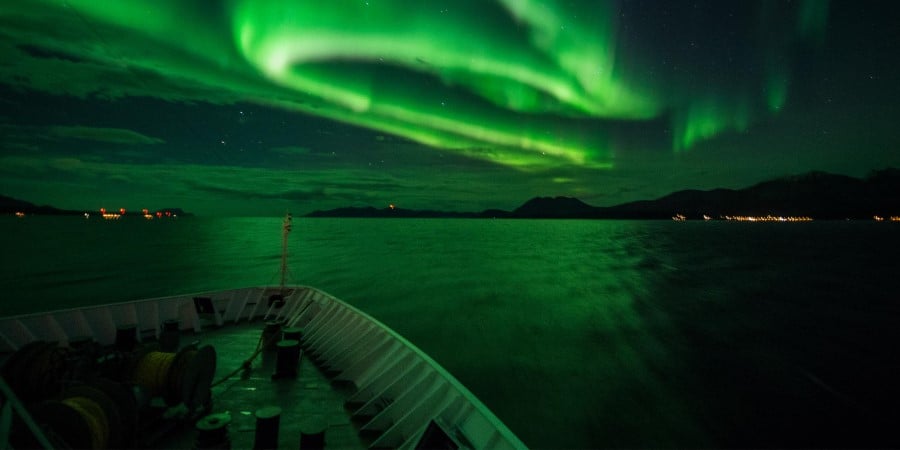 Do sunspots affect the Northern Lights?

The Northern Lights become more active and intense around Solar Maximum and in the three to four years immediately following the peak. During this time, the Northern Lights may be visible further south than usual, due to the increased number of electrically charged particles reaching the Earth. However, the polar auroras do not depend on sunspot activity at all. So, while it is true that sunspots affect the lights, this doesn’t apply to locations under the Auroral Ovals.

Is wildlife affected by the Northern Lights?

Dogs will often look at the sky and bark during an auroral display, which suggests that other animals are also aware of them. Although we can’t be certain, it is well documented that there are things animals can sense that humans can’t. It’s possible that some animals may be able to sense the natural disturbance caused by an active aurora

Do the Northern Lights make a sound?

There are records of people who live under the Northern Lights, particularly Inuit communities, who claim they have heard the aurora make a sound. Scientifically, it doesn’t seem feasible as sound doesn’t travel at the same speed as light. The aurora occurs 62 miles up in the sky, so anything making a sound would need to be propagating at the speed of light; otherwise, it would occur so long after the event that you wouldn’t connect the two. Audio recordings of the Northern Lights have been attempted but to date, they haven’t picked anything up.

However, nothing in science is impossible! There are theories that a form of electrical discharge from the Northern Lights could produce sound audible to humans but this has yet to be proven. Does moonlight affect the Northern Lights?

It depends on how intense the auroral display is. Moonlight will affect visibility if the aurora is faint, and bright moonlight will make it harder to see. If you want to see how a full display develops, it’s best to go around the time of the new moon.

However, if there is a bright aurora, you will even be able to see it in full moonlight.

The Northern Lights are more popular with tourists because it is more accessible, more hospitable and there is more to see and do. During winter, the Antarctic continent becomes surrounded with thick, floating pack ice, making it almost impossible to get there. In contrast, the Norwegian coast, Alaska, northern Canada, southern Greenland, Iceland, and the far north of Scandinavia and Russia are all populated areas with plenty of opportunities for tourists wishing to experience the Northern Lights.

Can you see the Northern Lights from space?

Both the Northern Lights and the Southern Lights are visible from space, and astronauts on the International Space Station get a view of both auroras as they travel around the globe. But the view from space is much less variable than it is from Earth; from the ground, the auroral structures grow in the sky and change form depending on your distance from them. There’s much more variety in the aurora you view from the ground than what you see from space.

Watch this stunning NASA footage of the aurora borealis from space

Do other planets have auroras?

There are auroral emissions on Mars, Jupiter, Saturn, and, we believe, Uranus and Neptune. The auroras on Jupiter and Saturn produce emissions in ultraviolet and infrared, which are invisible to the naked eye, but specialist cameras are able to capture them. There may be visible auroras as well, but they wouldn't look anything like those on Earth.

Mars also has an aurora, but it is completely different to that of other planets. Unlike Earth, Mars does not have a global magnetic field. As an aurora is dependent on a planet’s magnetic field, the aurora on Mars does not appear as rings like we see from earth. The aurora on Mars only occurs in certain places where there are magnetic rocks on the surface, and it is much more localized.

Are the Northern Lights harmful to humans in any way?

The Northern Lights occur so high up in the atmosphere that they don’t pose any threat to people watching them from the ground.

The aurora itself is not harmful to humans but the electrically charged particles produced could have some potentially negative effects to infrastructure and technology. The particles produce an electrical current that reaches the ground. In very extreme circumstances, this could affect electric power lines, oil and gas pipelines, computer networks, and iCloud systems. There could also be a risk to airplanes flying at very high altitudes, however, very few aircraft fly high enough, and any aircraft that did, wouldn’t be there long enough for there to be any danger.

How do I photograph the Northern Lights?

Photographing the Northern Lights isn’t an exact science; there are a lot of variables to consider. All cameras and lenses will give different results, so a bit of trial and error is needed to find out what works best for you. It’s also important to remember that no two auroras are the same; this means that settings which work one night, may not work the next. But don’t let this get you down; experimenting with different settings and seeing the range of results they produce is all part of the fun. For more information on how to photograph the Northern Lights, check out our 10 Photography Tips for Beginners Guide.