Norway’s ‘laziest chef’ lets the food do the work

Halvar Ellingsen is one of our Culinary Ambassadors and is designing a series of seasonal dishes for our ships. He is believes in letting the ingredients do the work, not the chef.

‘No, I’m not actually lazy!’ Halvar chuckles in his statuesque frame, a glint of boyish mischief flashing across his blue eyes. ‘That nickname was just a joke because I don’t spend a lot of time “ruining” the ingredients. Why spend time hiding a perfect carrot or a perfect piece of cod or lamb behind lots of techniques?’

For the award-winning chef from Sigerfjord, Northern Norway, ‘the ingredients are the stars’. He takes great care in being selective with his techniques to ‘take care of the food and give it character’.

It’s a pure approach to food that has won Halvar several national competitions and brought him to the kitchens of numerous high-profile Norwegian restaurants. His ethos and flair for cooking also secured him a coveted position on Norway’s national cooking team.

Home is where his heart is

After ten years of living and cooking in Oslo, Halvar decided to move home to be closer to his family and ‘get back in touch with the ingredients’.

Home for Halvar is Sigerfjord, in the beautiful Vesterålen archipelago. He proudly describes the region as having ‘the whole package’, thanks to its largely untouched nature and ‘an incredible amount of good raw materials for cooking’.

With fresh, local ingredients at his fingertips and the landscapes of Vesterålen as the setting, the only thing the intrepid chef needed was a venue. This would be Kvitnes Farm, built by Halvar’s great-great-great grandfather at the beginning of the 19th century. 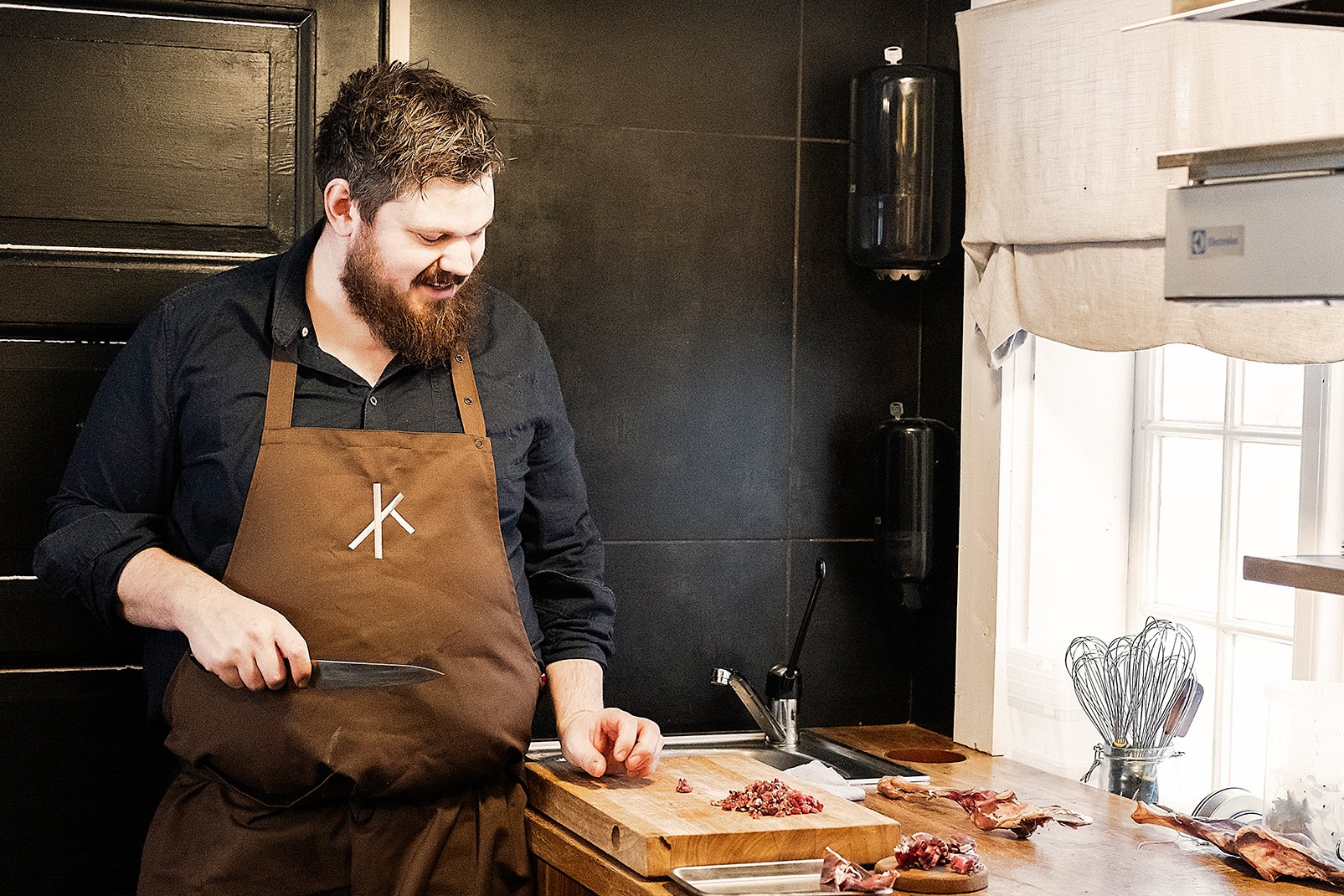 ‘Why come to Vesterålen to eat truffles and foie gras? It really makes no sense when we have so many good ingredients.’

It’s been six years since Halvar set up his kitchen at Kvitnes and it’s clear that this so-called ‘lazy chef’ and his team have been hard at work. The restaurant at Kvitnes Farm regularly receives rave reviews and has drawn comparisons to other Michelin-star Scandinavian restaurants.

What makes these accolades even more impressive is that Kvitnes sources virtually all of his vegetables, meat, herbs, and berries from the surrounding islands. Halvar admits that ‘while this is a great way to work, it’s also very demanding and requires a lot of planning… We will never finish the to-do list.’

Why is he driven to champion locally sourced ingredients despite the effort involved? He says, ‘it is important to me that our guests understand where they are when they eat at Kvitnes and what season it is. Why come to Vesterålen to eat truffles and foie gras? It really makes no sense when we have so many good ingredients.’

Kvitnes has allowed Halvar to work ‘close to the ingredients’ and challenge his creativity. He works to show that every ingredient is connected and ‘at the same time, cook damn good food!’ he exclaims with a grin.

‘I also find the sight of happy guests very satisfying,’ Halvar says. ‘It“s a great feeling to be able to show our guests how we cook in the most sustainable way. I hope guests who eat at Kvitnes are inspired to try doing the same, even long after they’ve returned home’.

Halvar sees our ships pass the farm each week, usually delivering items for Kvitnes at the nearby port of Sortland. His memories of our white, black, and red colors begin from when he was a boy.

‘I remember when some of the new Coastal Express ships came into port in Sortland for the first time. It was really cool for me as a little boy. Hearing the whistle of the ships a little before half past one every day was just a natural part of growing up in the area.’

Halvar is bringing his wealth of experience to a new collaboration with our Norway’s Coastal Kitchen, working alongside fellow head chefs Astrid Nässlander and Øistein Nilsen. Together, the trio will create a series of exciting seasonal and locally sourced dishes, each imbued with their hallmark style of cooking.

In his own words, Halvar says, ‘I’m really looking forward to having fun working together, giving guests on the ships food which tastes great, and which also highlights the ingredients of the areas they travel to.’