Culinary Ambassador on our Norway’s Coastal Kitchen menus, Head Chef Astrid Nässlander explains her food philosophy and why having fewer choices is a good thing.

On the island of Steigen, opposite Lofoten, Astrid Nässlander surveys her domain. This beautiful stretch of the Norwegian coast features dramatic mountains and hundreds of islands in turquoise water. It is also where the 30-year-old freelance chef and small-scale sustainable meat producer sources all the ingredients she needs.

‘There are endless amounts of berries and mushrooms and perfectly chilled spring water in the summer’, says Astrid enthusiastically. ‘Steigen is also home to many farms, and I love meeting the sheep and the cattle on the road or in the mountains’.

Path to the Chef’s Award

This 30-year-old mother of two has always had a love for cooking, but her path to success and recognition wasn’t a straight shot. ‘I spent five years being confused about educational choices and working part time in cafés and restaurants’.

Once Astrid accepted that her true passion was cooking, she spent five years ‘surrendering to cooking professionally, exploring my own creativity, and developing’.

Those years paid off. Astrid was a rising star, claiming the position of Head Chef at the prestigious Manshausen Hotel. She was subsequently the first person to win the newly created Norwegian Chef’s Award at the tender age of 26. 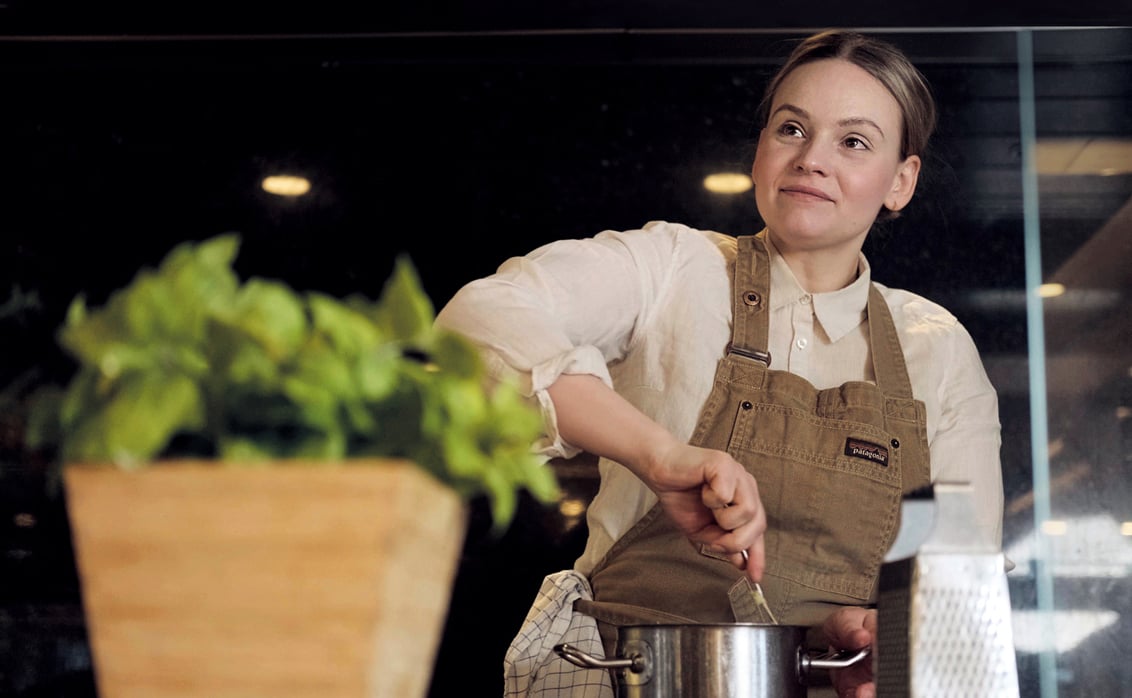 During Astrid’s tenure at Manshausen, she caught the fish herself and foraged in the forest. It was then that she began to develop her ‘less but better’ cooking philosophy.

‘I’ve gotten really good at being adaptable with ingredients, and also not wasting anything,’ she states proudly. ‘Cooking three-course meals daily for three years on a remote island with a once-a-week delivery makes you extremely creative. It’s almost like the less I have, the more creative I get. So, I can easily do my work without imported vegetables.’

She thinks for a moment and remembers. ‘Once, I made a dessert of literally everything I had. This was when I was working on a small island with no possibility of getting anything extra. It ended up being a pear poached in blackcurrant syrup, served with salted caramel sauce on a chewy meringue. It turned out very well and the entire restaurant went completely quiet whenever I had that on the menu!’

Astrid compliments her ‘less but better’ approach to cooking with what she calls ‘old-fashioned common sense’ in sourcing ingredients sustainably. For milk, she stops at a dairy farm. For meat, she contacts local hunters to see which animal is in abundance.

Astrid says that this old-fashioned mindset shows people ‘what we have around us, and that it’s possible to source food in a different way than the supermarket way’. She is particularly proud of the high-quality produce available in Steigen and the people behind them, whom she knows personally.

Her passion is clear when it comes to locally sourced meat. Many see meat as inherently unsustainable and Astrid wants to challenge that thinking. She instead asks people to ‘dig deep into how you source your meat, make conscious choices, educate yourself, get to know your local farmers, and maybe go meet their animals.‘

A recipe for ‘the right direction’

For Astrid, part of her satisfaction from cooking is the people she connects with through her food. Her collaboration with our Norway’s Coastal Kitchen concept connects her to even more people, including the guests on our cruises who experience her dishes and fellow chefs Halvar Ellingsen and Øistein Nilsen, who share her love of local ingredients.

‘I’m very excited about this new partnership with Hurtigruten Norwegian Coastal Express!’, she beams. ‘I’m also curious to see what happens when an old established brand meets a young ambitious brand like mine in its start-up phase.’

Astrid sees the old-meets-young theme reflected in many aspects of her work. ‘I like to describe it with the term “retrovation”", meaning looking back when developing the future. With the plate as a canvas, it can get lead us to very creative places, giving old knowledge and techniques a young and daring expression.’

She concludes with a smile, ‘I definitely interpret this new opportunity to work on Norway’s Coastal Kitchen as a sign that I’m headed in the right direction.’ We agree!